So… What About Participation in Government? 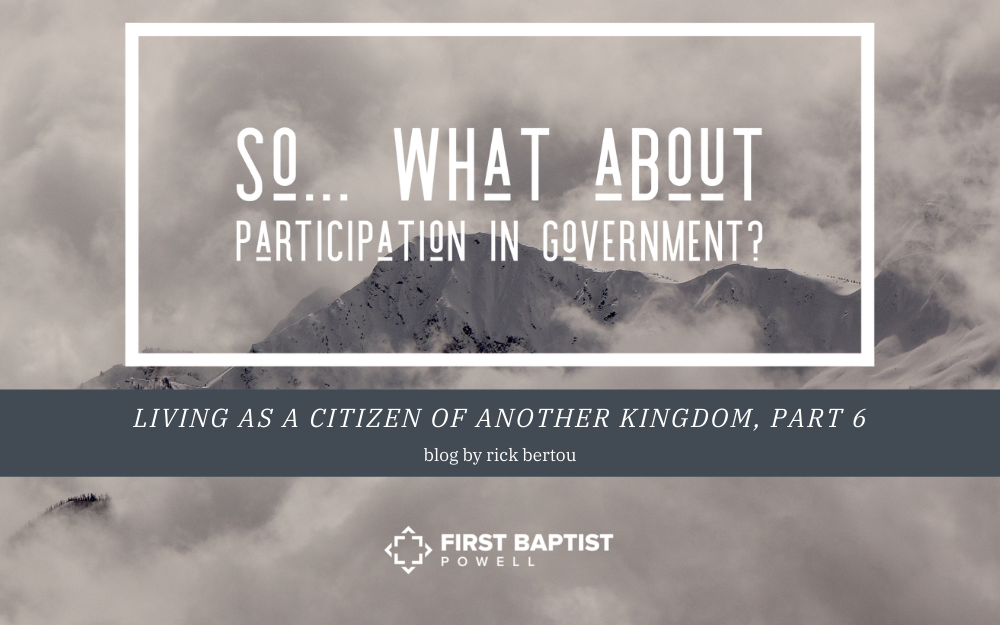 How to Live as Citizens of Another Kingdom – Part 6

We’ve finally come to it – the end of this 6-part blog series entitled “How to Live as Citizens of Another Kingdom”. You can read the earlier parts (Parts 1-5) by scrolling to the bottom of our homepage.

To be honest, this final topic is my original purpose in writing this series. However, I felt the first 5-parts of the series were necessary to lay a foundation before we can consider what our participation in government should be. Without understanding our allegiance as citizens of the Kingdom of God and our responsibilities as ambassadors of Christ, all the while holding tightly to an eternal view of God’s purpose and will, we have no chance of attaining a biblical understanding of a Christian’s role in government. Instead, we are more likely to mix our spiritual responsibilities and freedoms with more fleshly leanings and understandings. It’s important that we understand our calling and the purpose for why God has us here.

The final question we’ve been leading up to is – what about the Christian’s participation in government? The previous blogs should give you an idea of what I’m driving to, but here’s four points to make it clear.

First, as Christians, we are called to influence society. In the Sermon on the Mount, Jesus commands his followers to be “salt” and “light” to the world (Matt 5:13-16). The expectation is that we will positively influence all those we encounter. The thing about “salt and light” is they tend to drive change. When salt is applied to meat, it changes its flavor and preserves the meat. Light always overcomes and displaces darkness. Therefore, Christians should engage and influence the world, for the benefit every society, and that includes participation in government in various capacities as God wills.

For most of us, our influence includes exercising our right to vote, calling our representatives to influence votes, and engaging in dialogue with our neighbors and friends in a way that promotes Christ and a biblical worldview. For a smaller number of Christians, God has called some to more active participation as executives, legislators, judges, lobbyists and many other roles in all branches of local, state, and federal government. Of course, what I’ve described is participation in an American form of democratic government. There are many countries in which citizen participation is much more limited. However, Christians should influence wherever they can as the Lord leads.

Second, while we’ve been commanded Lord to influence society, we need to influence with the right form and possess the right expectations. As previous blogs established, we are citizens and ambassadors of another kingdom who’ve been sent into the world by our Lord’s command (Matt 28:18-20) . Our job is to influence society by making an appeal using the gospel of Jesus Christ in order that we might win some (1 Cor 9:19-23). It is not to exercise our moral superiority or establish a “Christian nation”. Our influence should never include anger, frustration, or condescension as I see many Christians doing on social media. The Bible is clear we’re to protect and legitimize our message by possessing the Christ-like attitudes. We must guard our expectations for what might actually change.

Third, to emphasize the last point, nowhere in scripture are Christians called to fight the government. I’m aware of some trying to justify their fight against socialism, racism, the unborn, LGTBQ, and every other form of sinful behavior, as the Christian’s responsibility to fight and resist government. I understand their frustration and desire to fight back. But it’s not what we’re called to do.

There’s not one shred of evidence in the Bible that calls Christians to fight the government on behalf of these issues. Not once in the 4-gospels did Jesus confront the ruling Roman Empire – an empire that was multi-theistic in religion and committed abhorrent crimes against humanity including slavery, racism, and mass persecution. Nowhere in the New Testament is there any instruction (implicit or explicit) to fight against forms of government, policies, issues, or abuses. Some Christians emphasize certain scriptures to make a case for fighting back, but those commands as a higher purpose just aren’t there.

However, our fourth point, the Bible explicitly commands Christians to do just the opposite. We are commanded to submit to the ruling government.

Rom 13:1-7 – Let every person be subject to the governing authorities. For there is no authority except from God, and those that exist have been instituted by God. 2 Therefore whoever resists the authorities resists what God has appointed, and those who resist will incur judgment. 3 For rulers are not a terror to good conduct, but to bad. Would you have no fear of the one who is in authority? Then do what is good, and you will receive his approval, 4 for he is God’s servant for your good. But if you do wrong, be afraid, for he does not bear the sword in vain. For he is the servant of God, an avenger who carries out God’s wrath on the wrongdoer. 5 Therefore one must be in subjection, not only to avoid God’s wrath but also for the sake of conscience. 6 For because of this you also pay taxes, for the authorities are ministers of God, attending to this very thing. 7 Pay to all what is owed to them: taxes to whom taxes are owed, revenue to whom revenue is owed, respect to whom respect is owed, honor to whom honor is owed.

Some claim the above speaks as a warning to those who would disobey the law and not so much to law-abiding citizens who are resisting moral degradation. And yet, verses 6-7 are clear instruction to all. Pay your taxes. Show honor and respect to those in government – even if you disagree with them. Paul reiterated the instruction in his letter to Titus.

Titus 3:1-3 – Remind them to be submissive to rulers and authorities, to be obedient, to be ready for every good work, 2 to speak evil of no one, to avoid quarreling, to be gentle, and to show perfect courtesy toward all people. 3 For we ourselves were once foolish, disobedient, led astray, slaves to various passions and pleasures, passing our days in malice and envy, hated by others and hating one another.

The above instruction doesn’t just speak of submissive actions but also a submissive attitude. In our submission to government (and in our disagreement) the instruction is clear – attitude and character matters. In fact, biblically speaking, they are of tremendous importance. Christians are not to be condescending toward others, attacking, or quarrelsome. We are to kind, gentle, loving, courteous, even sacrificial to everyone as we represent Christ to the world. These explicit commands are repeated throughout scripture.

Therefore, since attitude and character are of paramount importance, we must be very careful who we align ourselves with. The Bible is very clear that we’re “not to be yoked with unbelievers” (2 Cor 6:14). The illustration is two oxen bound together by a single apparatus where they pull a load together in the same direction. The two, being affixed to one another, will succeed or fail as one in their common purpose. But what if the two oxen don’t ultimately have the same purpose?

Our Lord has commanded us not to “be yoked” with unbelievers in any way (ie. marriage, business, government, etc). Just because we may agree on the same policies or issues, the reasons or motivations are not spiritually the same. This was a major problem for Christians in the last presidential election. Many argued to vote for a certain candidate solely based on the issues. I don’t have an issue with that. I recommend voting the same way. However, I drew the line at publicly promoting or supporting a candidate so as not to be associated or tied together (yoked) with either of them. I may have been “pulling in the same direction” as one of the candidates, but I refused to be tied to him in any way. I’m tied to Christ alone, who it is my Christian service to represent Him as His ambassador in the world, and who really does the “pulling” through me.

We are explicitly called to submit to the government authorities, and I see few exceptions to that command other than obeying God above men. When there is a conflict between the two, obedience to God comes first regardless of the consequences that may come from men.

So that’s it. When it comes to government, we are tasked with influencing society as representatives of Jesus Christ, which includes active participation in government. However, we must maintain the right form and expectations for our involvement. We are not called to fight against government, rather we’ve been explicitly commanded to submit to the authorities God has placed over us.

God has always made it clear that his thoughts and ways are much higher than mine (Isaiah 55:8-9). Therefore, I submit myself to Him, even if I don’t understand or desire the direction we appear to be heading. But then again… that’s why He’s God and I’m not.