Life in a Washing Machine 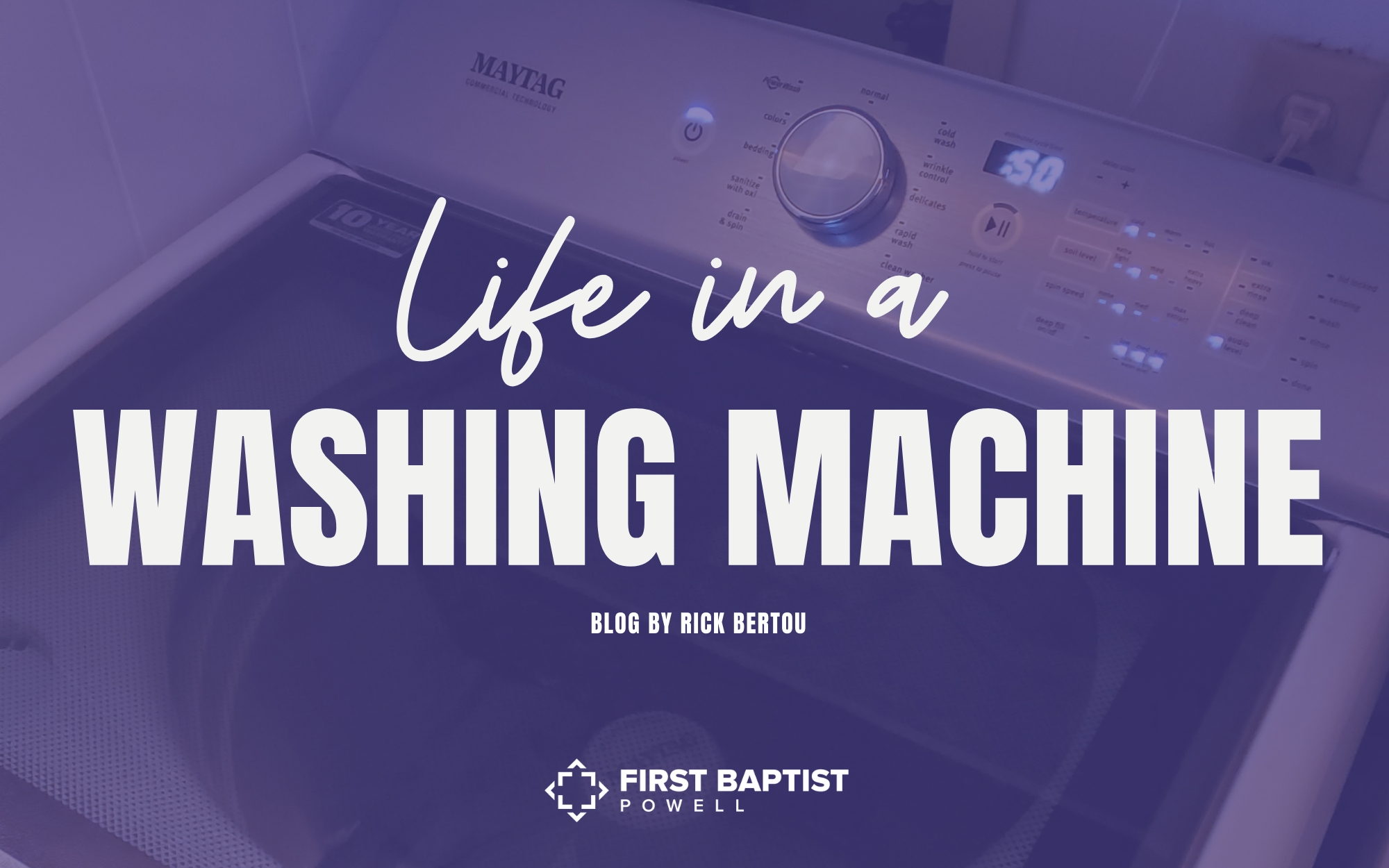 During a Black Friday sale last year, Cindy and I bought a new washing machine. We decide to replace our front loader with a top loader. One surprising feature of our new washing machine is that it has a clear glass lid. Therefore, you can see what’s happening to the clothes as the machine does it’s work. The clothes are being aggressively stirred up and agitated. They’re in constant motion; tossed around, coming to the top, and getting sucked back down inside. There’s violent activity going on throughout the inside of the washing machine.

Over these many months, there’s been a heightened anxiousness and concern amongst people everywhere because of being “stirred up or agitated”. The reasons are obvious. Take your pick: Covid-19, racial tension, political division, the economy, the election, flu season, job loss, and on and on. Our world is caught up in turbulent times. And yet, I’m not sure that it’s all that different than previous times, albeit on a smaller, more localized or personal scale: cancer, car wrecks, tornadoes, heart failure, cutbacks, potential of nuclear holocaust (if you’re old enough to remember), etc. While recent events seem to have grown more recently to a global scale, the suffering isn’t new. Ever since I’ve been alive, I’ve seen many communities and families experience very trying times.

So how do we deal with it? How do we manage through the turbulence? Where do we find peace or rest? For the Christian, how do we endure to the end (Matt 24:13)?  On the night before Jesus put himself on the cross, He said…

Jesus’ concern in the first sentence of that verse is directly applicable to our modern time and difficulty. The Greek word translated as “troubled” is “tarassó”, which means to “stir up or agitate”. The world external of us is the machine that’s turning us up and all around, and the agitation cycle is set on high. We’re all feeling it!

How then does he encourage us to respond? What part of us are we to “not let be troubled?”

Our hearts. By “hearts”, Jesus means our inner being which includes our conscious minds (thoughts, feelings, emotions, etc). He’s telling not to let our hearts and minds be stirred up or agitated! His instruction can be summarized this way; though we live externally in a “washing machine” world, that is constantly stirred up and agitated, we’re internally not to let our minds be like they’re inside a washing machine! We’re to experience stability, peace, and rest.

How is that possible? Jesus tells us in the next sentence. “Believe in God; believe also in me.”

People wonder – if there is a God, why would he allow so much suffering? Maybe it’s because we’re particularly dense (Exodus 32:9) and it takes some “stirring and agitation” to make us start questioning things again. One of my best friends told me this week that he believes something is going on where he works. He’s had multiple opportunities to talk about the Lord with 3-different people recently, and that’s a marked difference than before all this trouble began. People are coming out of their stupor and asking questions beyond what they normally see, think, or feel.

What some are finding is that God is the one who’s in control. He exists and is allowing things to be stirred up, so that people will start seeking and finding Him again. He’s the one in charge of the “washing machine”. For the person who comes to the realization that this modern time comes from his goodness, it often leads to their saving faith, while for the already saved, it’s a call to increase our faith. “Believe in God” (that he exists) and “believe God” (in his promises), and you will be saved.

Jesus adds, “believe also in me.” Why would he say that? The theological answer is that Jesus is part of the triune Godhead. He’s the Son of God, who by believing in Him and his death on the cross for our sin, brings salvation to us. But another aspect of the answer for a troubled world is that by studying Jesus’ life and teaching, we see what his Father is really like. This is a validated a few verses later in John 14, when Philip says to Jesus, “Show us the Father and it is enough for us (to believe).” Jesus replies…

The point is that by believing in Jesus; his life, teaching, love, and compassion, even death on a cross, we see the heart and attitude of his Father. By believing in Jesus, people are able to make that leap of faith to believing in God, who is their creator, sustainer… the one who is sovereign over the entire universe. By believing and trusting in Jesus, we find the power and faith to keep our inner person at rest and peace, even while the world outside us is tearing itself apart.

So let his be an encouragement to the one who is seeking answers. The world is not a washing machine left on an indefinite wash cycle, with no hope of the timer running out or someone pulling the plug. Our God is in control of the machine. It obeys his voice and does his will. Believe in that. Believe in God. Believe in Jesus and let not your hearts be troubled. Oh, and a final thought to think on. Even with all that stirring up and agitation, the washing machine has a purpose. It’s to make the clothes clean. God’s purpose is to make you and I clean. Don’t miss his purpose in this for you.