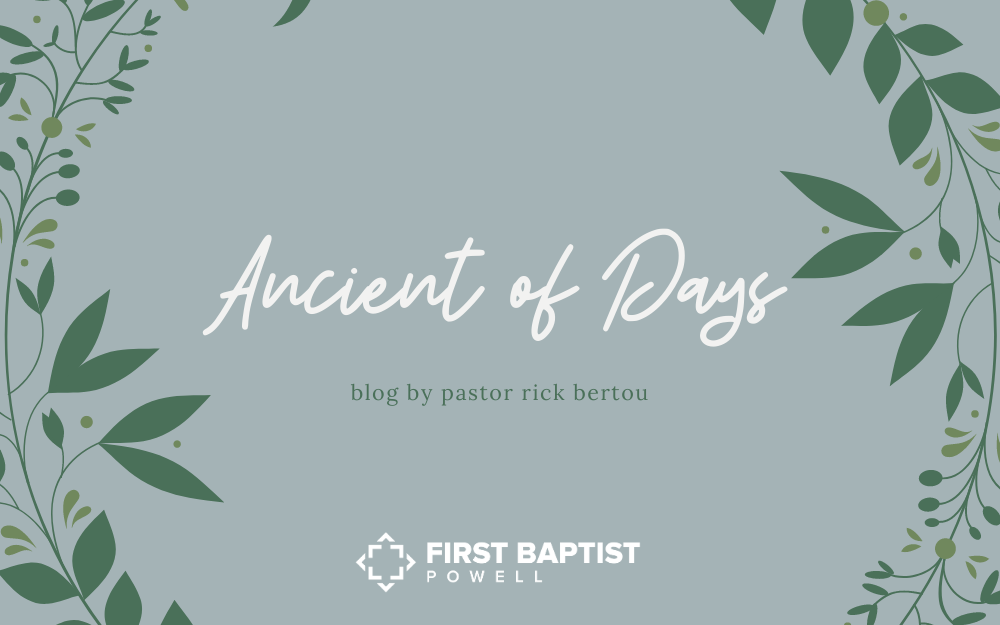 This past Sunday, we sang a new song during Sunday worship entitled “Ancient of Days” by City Alight. While the song was new to me, the phrase “Ancient of Days” is not. The Ancient of Days is a title for our great and mighty God. It is my favorite title for God, and when I hear it, my heart and soul is filled with tremendous comfort, hope, and awe.

The title “Ancient of Days” is found in the Bible only three times, all in Daniel chapter 7 (vs 9, 13, 22). Chapter 7 summarizes a vision Daniel received from God regarding the future. Daniel was granted a glimpse of what’s happening behind the veil of this world and told to write it down as he saw it. Track with the me the three uses of this title in this vision.

and the Ancient of Days took his seat;

his clothing was white as snow,

and the hair of his head like pure wool;

his throne was fiery flames;

The imagery seen by Daniel in the vision is one of God as an old man, with white hair, wearing a white robe. This old man has been around for an exceptionally long time. However, we should not mistake his advanced age as weakness or frailty. Afterall, the old man represents the living God who exists in eternity.

2 Before the mountains were brought forth,
or ever you had formed the earth and the world,
from everlasting to everlasting you are God. – Psalm 90:2

Daniel 7:9 says that the old man is sitting on a throne that’s burning with fire. Very often, fire represents purifying judgment in the Bible. Daniel 7:10 continues with more images of fire, surrounded by many beings serving him, and many more standing before him. The scene becomes a court room. The old man in white is the sitting judge; an immensely powerful judge, and the books (records) are opened.

The second reference to the Ancient of Days comes in Daniel 7:13.

and behold, with the clouds of heaven
there came one like a son of man,
and he came to the Ancient of Days
and was presented before him. – Daniel 7:13

This part of Daniel’s vision includes someone who would come like “a son of man”; not a man, but like a man. The person with whom Daniel saw in his vision is the Messiah, Jesus Christ, the Lord and Savior overall, before his incarnation. This Son of Man stood before the Ancient of Days and verse 14 says, “to him was given all authority, all glory, and an everlasting kingdom.

Daniel 7:21-22 – 21 As I looked, this horn made war with the saints and prevailed over them, 22 until the Ancient of Days came, and judgment was given for the saints of the Most High, and the time came when the saints possessed the kingdom.

This mention of the Ancient of Days is a little different from the first two description. This time the image is not of an old man, but of an immensely powerful warrior. The image shifts from a courtroom to a battlefield, and the change in character of the Ancient of Days demonstrates the Trinity (Father, Son, and Holy Spirit). This Ancient of Days is the Avenger, Defender and Righter of all wrongs. He is the Lord Jesus Christ, descending upon the earth, executing judgment as determined by the Most High Judge.

I remember hearing an analogy, many years ago, regarding the Ancient of Days as a judge. The story goes that there was a small town where a band of evil men settled nearby. Over time, these evil men terrorized and committed many crimes against the nearby townspeople. As the evil men remained, their descendants continued to perpetrate many crimes, so that the suffering by the townspeople went on for decades. The circuit court judges that had passed through the town, judging cases, were not part of the town. They did not know all that had happened. Many were paid off by the criminal elements, while others were lenient with the offenders, as they moved on to the next town.

The town was continually left defenseless, until one day, when a very old judge arrived to hear the cases presented. No one recognized this old man when he sat in the courthouse seat, however, they soon realized that this old man had really come home. They found out that he had grown up in this town. He left to become a great judge in a faraway city, but he’d been keeping tabs on things here. As the cases were presented, he knew everything that happened. He knew every single thing the evil men had done. He knew what the town was like before these men showed up and the suffering since. He could not be bought or persuaded by evil men, because he was a great judge who loved the town he’d grown up in. And now he’s come back to render fierce judgment, with the power and authority to carry it out.

You can understand now why the title “Ancient of Days” might be my favorite title for God. We currently live in days of great evil, with many injustices perpetrated against people, and the offenses are ever increasing and accelerating. The world has succumbed to evil forces who rule over it (spiritual and fleshly). Very often, we grow weary from all the fighting, and fearful because the battles are too close to home – deeply affecting the people we love. Christians are the embattled townspeople living in this evil world, terrorized and oppressed by evil beings. It seems that we’ve been left defenseless.

And yet, by the power of the Spirit, I attempt to live obediently and peacefully, with faith and hope, because I know what the Bible promises. The Ancient of Days is sitting on his throne (Dan 7:9). He knows what’s been going on. He’s known from the beginning because he was here before the beginning (Is 57:15). He knows everything (1 John 3:20). He cannot be bought or persuaded (Acts 8:20). He will pass His judgment, and he will execute his judgment (Ps 149:9). He has absolute power and authority (Rom 1:20). He will right all the wrongs (Is 62:1). He will establish a kingdom of righteousness and peace (Is 11:4). And I will receive an inheritance because I am united with him in glory (Rom 8:17).

And that is why my heart and soul is filled with tremendous comfort, hope, and awe! I can imagine what Daniel saw and I trust the Word of God. The Ancient of Days has ruled, and He is coming. Even so, come Lord Jesus!