Herald the Coming of the King 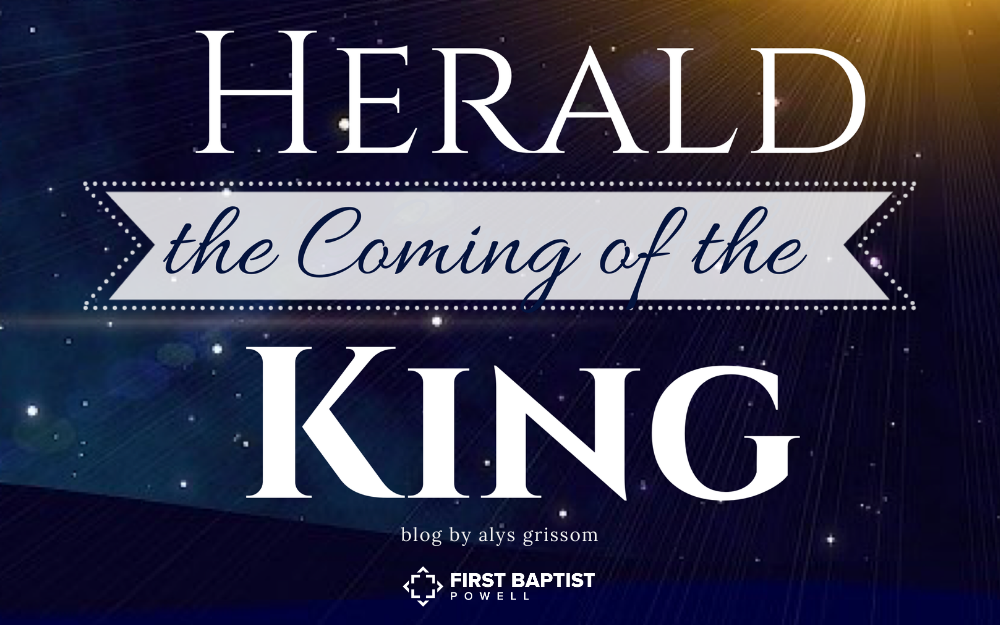 One Saturday morning several weeks ago, I sat in my bed having my quiet time. I had begun to read a new advent devotional that had been released the month before. I already had gotten the idea that if it was good and solid, I’d like to have a book club of sorts during the upcoming advent season.

The author pointed to a text in Mark 1, and as I read it, my spirit swelled with emotion as the words of scripture became my prayer and desire for this season:

“The beginning of the gospel of Jesus Christ, the Son of God,

just as it is written in Isaiah the prophet:

“Behold, I am sending My messenger before You,

Who will prepare Your way;

The voice of one calling out in the wilderness,

‘Prepare the way of the Lord,

John the Baptist was the one who was born as the prophet to be the one to prepare the way for Jesus. They were relatives, born some 6 months apart. If you read Luke, you find a little back and forth in the first two chapters: birth of John foretold, then the birth of Jesus foretold; John is born, then Jesus is born. There’s a lot you could study here that would be edifying to you, but that’s not my point at this time.

What I want you to focus on right now is John’s mission: from the moment the angel Gabriel announced his birth to his father, Zacharias, in the temple, John was born for a purpose for a moment in time. He was to prepare the way for the Lord,

“And he will turn many of the sons of Israel back to the Lord their God. And it is he who will go as a forerunner before Him in the spirit and power of Elijah, to turn the hearts of fathers back to their children, and the disobedient to the attitude of the righteous, to make ready a people prepared for the Lord.”” (Luke 1:16-17)

On the eighth day after John is born, Zacharias speaks similar words over the child  in Luke 1:76-79.

His mission was clear, and we know from reading scripture that he did exactly what was prophesied about him.

John went before Jesus to a people in a spiritual wilderness. They had been without a prophet, who served as a voice for the Lord, for over 400 years! Imagine, generations never hearing from God!

They were politically oppressed, being ruled and taxed by the Roman government.  While they practiced what God had required from them in the Law, their own religious leaders imposed standards on them from an additional text called the Talmud that were impossible to keep, a yoke they could not bear (Matthew 11:28).

This was a great time of darkness for God’s people, and John came to prepare the way for the Light of the world. As Warren Wiersbe writes, “John was an evangelist who pointed sinners to the Savior…John was the herald who came before the King and proclaimed His coming to the people.”

What has that to do with you or me?

Let’s go back to that Saturday morning a few weeks ago when I read from Mark 1. While reading that scripture, tears fell, and I began praying that I, along with all believers, would be “John the Baptists” this Advent . I even wrote it in my Bible, “Help us to be Your messengers this season!”

In so many ways, 2020 has been a wilderness for us. Between the pandemic, social unrest, and the election, it’s been a very long year of disappointments, anxieties, and fears. None of it was what we had planned.

But perhaps what many of and around us see as the enemy doing evil, God means for good (Genesis 50:20).

If nothing else, this year has shown us that everything we build our life on is unstable. The facade that we have control has been exposed. If you’re like me, you’ve seen that the idea that “If I do this, then this will happen” is a falsehood.

The only true and steady thing is Jesus Christ. He, alone, is our only Hope. He will never change, never leave, and never disappoint. And best of all, while so many events have been cancelled this year, the banquet at His table has a set date and time that no one can move!

So this Advent season, would you be like John the Baptist? Would you cry out like a voice in the wilderness to prepare the way of the Lord? People need TRUTH in a time where we can’t believe much; they need HOPE when we feel all of it’s been lost; they need healing because we are all eternally ill. Salvation has come!

If you’re reading this, that means that the Lord has called YOU to this moment in history. As a believer in Christ Jesus, YOU are His messenger! Let’s pray to be like John the Baptist this season, heralding the coming of the King! He came once, and He is coming back again! One day soon, we will all bow at the feet of King Jesus (Philippians 2:10)!