What Kingdom Do You Identify With? Living as a Citizen of Another Kingdom – Part 1 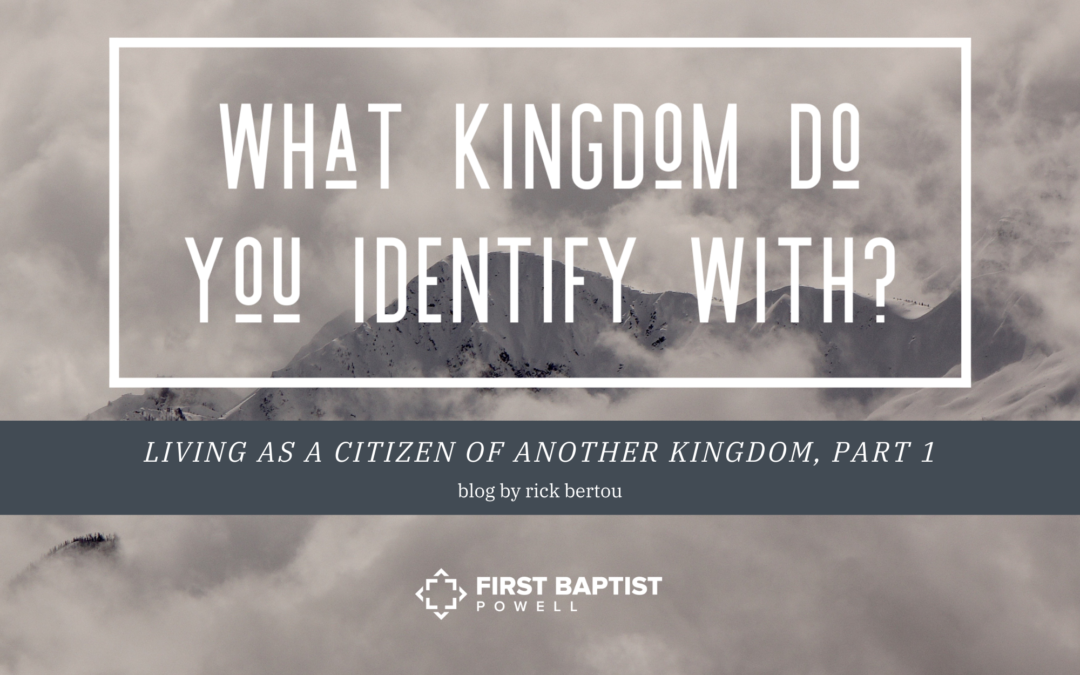 What Kingdom Do You Identify With? Living as a Citizen of Another Kingdom – Part 1

This week’s blog is in many ways a new thing for me. It is the first in a 6-part series designed to answer the question – how do we live as a citizen of another kingdom? This is something I publicly committed to a few months ago. I do not know a topic more pressing for Christians right now. And that leads to the question – why write this series? What is the purpose? What do I hope to accomplish?

The reason I am choosing to write this series is to help my brothers/sisters in Christ who struggle with what it means to live as “a citizen of another kingdom” in the way the Bible teaches us. The world around us has changed. For the past 12-months or so, the pandemic has affected every part of life across the entire globe. To make things worse, life in America has suffered through violent ethnic tension, a vicious presidential election, a volatile economy, and many other derivative issues. Citizens of every country have faced a myriad of restrictions, lockdowns, death of family/friends, job loss, etc. that has changed life in our country and across the world.

Even more, our personal psyche has been adversely affected. There has been a dramatic increase in anxiety, fear, depression, anger, and expressed frustration/hatred between fellow citizens. Pastor Phil Jones used to say, “when someone is shaken, whatever is bottled up on the inside comes out.” Truth is, many of us are good at suppressing our thoughts and feelings by stuffing them down deep where no one can see them. But when life’s difficulties begin to shake us at our very core, we often lose our self-control. The result is our raw, true thoughts and feelings bubble over for all to see. For some, bubbling over means posting on social media, while for others, it means joining in demonstrations or protests along whatever ideological line they ascribe to. Christians are not immune to being shaken, bubbling over, and expressing disappointment in ways that that are not encouraging or helpful.

My question to the Christian – is this what our Lord expects of us? Is this what gives glory and honor to Christ? What does the Bible teach us regarding our involvement with the world or public affairs? How did Jesus handle circumstantial changes and what does he command his followers to do? There is no better or important time to look to scripture than now.

In this series, I am going to focus on 3-roles we perform as followers of Christ. They are “citizen”, “ambassador”, and “soldier”. Let’s be clear that these are not just biblical analogies or metaphors. These are specific roles or “callings” that every disciple of Jesus Christ is commanded to follow without exception. Following are some of the scriptures that identify these roles:

Eph 2:18-19 – 18 For through him we both have access in one Spirit to the Father. 19 So then you are no longer strangers and aliens, but you are fellow citizens with the saints and members of the household of God, 20 built on the foundation of the apostles and prophets, Christ Jesus himself being the cornerstone,

Philippians 3:19-21 – 19 Their end is destruction, their god is their belly, and they glory in their shame, with minds set on earthly things. 20 But our citizenship is in heaven, and from it we await a Savior, the Lord Jesus Christ, 21 who will transform our lowly body to be like his glorious body, by the power that enables him even to subject all things to himself.

2 Corinthians 5:20 – 20 Therefore, we are ambassadors for Christ, God making his appeal through us. We implore you on behalf of Christ, be reconciled to God.

Ephesians 6:19-20 – 19 and also for me, that words may be given to me in opening my mouth boldly to proclaim the mystery of the gospel, 20 for which I am an ambassador in chains, that I may declare it boldly, as I ought to speak.

Philippians 4:25 – 25 I have thought it necessary to send to you Epaphroditus my brother and fellow worker and fellow soldier, and your messenger and minister to my need,

2 Timothy 2:1-4 – You then, my child, be strengthened by the grace that is in Christ Jesus, 2 and what you have heard from me in the presence of many witnesses entrust to faithful men, who will be able to teach others also. 3 Share in suffering as a good soldier of Christ Jesus. 4 No soldier gets entangled in civilian pursuits, since his aim is to please the one who enlisted him.

All 3-roles are significant, and they point to a role in, or a responsibility to government. A “citizen” is one who is granted the full rights and responsibilities of a nation or kingdom. An “ambassador” is defined as a diplomatic agent sent as a representative or messenger to a foreign country or kingdom. A soldier is someone who serves in the army of the kingdom who employs him. What they all have in common is how they relate to a particular kingdom. The questions then arise – what kingdom are we talking about? And what kingdom do we identify with?

Every human on earth is part of (willingly or unwillingly) a physical kingdom with borders. We are subject to the authorities of that earthly kingdom. However, when we became a Christian, we became a citizen of another kingdom that transcends every earthly kingdom. We became citizens of the eternal Kingdom of God. Therefore, we have been endowed with every right and responsibility that Almighty God has afforded to the people of His Kingdom. Every citizen in this kingdom serves as a soldier in our King’s army. And since we still live in the world (regardless of the nation state we live in), we became foreign ambassadors who represent our new Kingdom and its King to the world. We were drafted into these superior roles the moment we confessed Christ as Lord and were saved.

Here is where I think there is much confusion for Christians in our present day, living under rapidly changing circumstances. Our understanding of what it means to live as a citizen of the Kingdom of God is clashing with whatever our earthly citizenry is – especially for American Christians who have married earthly and heavenly citizenry. As Americans, we cherish the freedoms that have been fought over and protected for 2.5-centuries. We often associate those sacrifices as Christian values because of the remarkable influence Christianity had on our founding fathers. And yet, the pandemic, ethnic tensions, more liberal shifts in our government, and other factors have tested our allegiances and exposed many fractures, even between Christian circles.

What we have forgotten – or – what is being tested is our understanding and commitment to living the roles that we were given when we became Christian. We were given the high honor of living as citizens, ambassadors, and soldiers of the Kingdom of God. These roles are far superior, weightier, and more demanding than any responsibility to any earthly kingdom. The Lord’s commands to fulfill these roles demands our full allegiance and attention because of the nature of eternal consequences. Nothing about these roles excludes the Christian from participation in earthly government – in fact, it could drive us deeper into participation – as long as we approach our participation as a faithful ambassador, expressing the same kind of heart and mind as Jesus did when he willingly went to the cross.

So, as we begin this blog series, I am asking you to pray and meditate on the Bible verses above. And then prayerfully answer the questions – 1). Which kingdom do you identify with? 2). Is there something the Lord might be asking you to change?