The Nature of our Ambassadorship 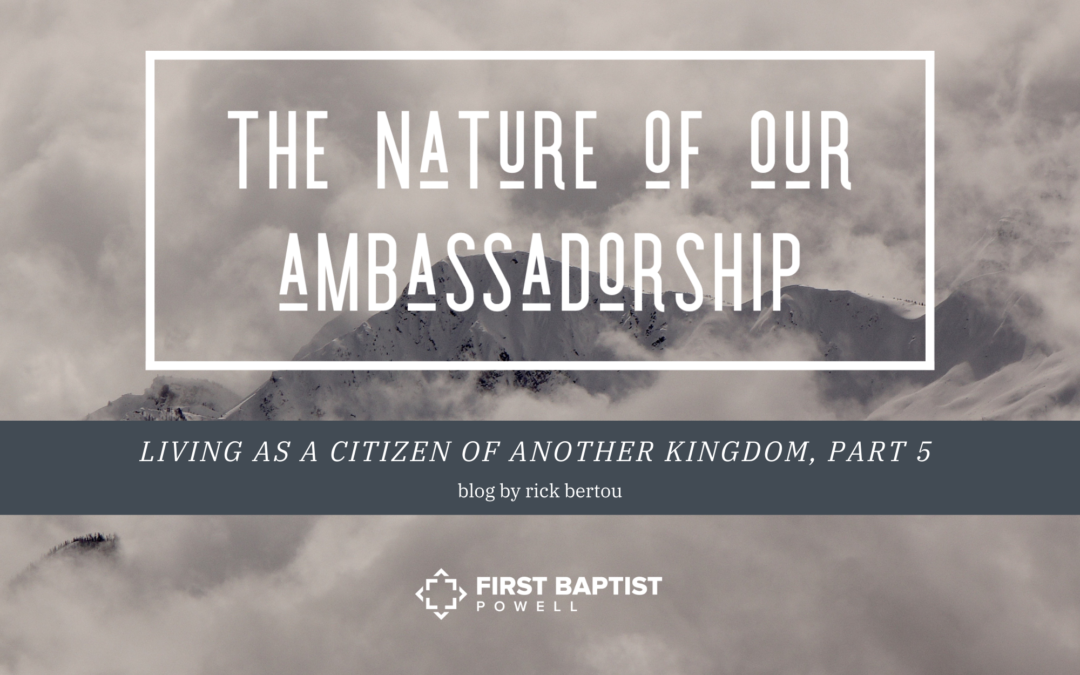 How to Live as Citizens of Another Kingdom – Part 5

We’re nearing the end of this 6-part blog series entitled “How to Live as Citizens of Another Kingdom”. You can read the earlier parts (Parts 1-4) at www.fbcpowell.org near the bottom of the homepage.

2 Cor 5:20 – 20 Therefore, we are ambassadors for Christ, God making his appeal through us. We implore you on behalf of Christ, be reconciled to God.

Cindy and I enjoy watching “Madame Secretary” which is currently streaming on Netflix. If you’ve ever watched the show, the main character is Elizabeth McCord (played by Tea Leoni) who is the Secretary of State. Cindy and I enjoy the dramatic, political intrigue within the State Dept, but also the personal interactions within the McCord family. It’s a great show for Cindy and I to watch together and it also makes for a good illustration of our ambassadorship.

When I consider our Lord’s calling to be his ambassadors, I often think of what that means in relation to “Madame Secretary”. As Secretary of State, Elizabeth McCord is the chief ambassador of the United States and a U.S. citizen. All the ambassadors who work at the Department of State are American citizens. Their citizenship defines allegiance to our country. However, their vocation is to work as “ambassadors” or “representatives” of the United States to other nations or countries. Very often that includes living as foreigners in their assigned country. They do not give up their American citizenship or assume citizenship in their foreign country ofresidence. They are “foreigners” who represent the American government. On the show, they are constantly working to find ways to influence and encourage other nations to join them in democracy and freedom.

As Christians, we have been called to serve as foreign ambassadors in the community God has sovereignly planted us. Our citizenship defines allegiance to the Kingdom of God. However, our job is to represent the interests and values of ourKing and his Kingdom, to the people around us. According to 2 Cor 5:20, our representation is identified as God making his appeal through us – “on behalf of Christ, be reconciled to God.”

More specifically, his appeal is that God rescues sinners through the work of Jesus Christ on the cross. All who confess their sin to God, trusting in Christ’s sacrifice alone to pay for their sin, will be saved or rescued. It is by faith that we are reconciled to God, making us citizens of his Kingdom, and personally invested as His ambassadors. Very often, the gospel we share includes the telling of our own rescue or salvation as we connect with those around us.

As ambassadors the gospel of Jesus Christ must be our primarymessage. It is the only thing that leads us to eternity and gives lasting hope to sinners. Sure, there are other things that we can discuss and work through with others, but we must be careful not to become distracted or take on other fights that take us off message.

2 Tim 2:1-4 – You then, my child, be strengthened by the grace that is in Christ Jesus, 2 and what you have heard from me in the presence of many witnesses entrust to faithful men, who will be able to teach others also. 3 Share in suffering as a good soldier of Christ Jesus. 4 No soldier gets entangled in civilian pursuits, since his aim is to please the one who enlisted him.

We must be careful that it is Christ we proclaim (Col 1:28) and not get entangled with “civilian pursuits” (politics, economics, family issues, etc) because they are distractions that bring no real solutions. Rather, we should view these unsettling, real-life occurrences as openings to share Jesus, and “him crucified”. He is the only solution to everyone’s real-life problem – eternal death by sin.

Titus 3:1-3 – Remind them to be submissive to rulers and authorities, to be obedient, to be ready for every good work, 2 to speak evil of no one, to avoid quarreling, to be gentle, and to show perfect courtesy toward all people. 3 For we ourselves were once foolish, disobedient, led astray, slaves to various passions and pleasures, passing our days in malice and envy, hated by others and hating one another.

I’m reminded of another Secretary of State (a real one), General Colin Powell who served in the early 2000’s. General Powell was an expert in combat and war. He had a long, distinguished military career rising to the rank of a four-star general. He was the Chairman of the Joint Chiefs of Staff during the Persian Gulf War in the early 90’s. General Powell knew how to conduct war and win.

However, when General Powell became Secretary of State in 2001, he set aside his military training to become the “chief ambassador” of the United States. General Powell’s international and military education and experience proved useful in his new role, and yet now he needed to employ different tactics. Diplomacy and statesmanship were now the tools of his trade. His responsibility was to represent the President of United States, using peaceful methods, and not allow himself to get distracted by the things that might have come more natural to him.

Over the last year, many Christians have demonstrated their expert ability to “conduct war” in the circles where they’ve been planted, especially on social media. While I empathize with theirfrustrations, my concern is the nature of their ambassadorship. Titus 3:1-2 (and various other scriptures) makes it very clear that we’re to be submissive to rulers and authorities (whether we agree with them or not). We’re to be obedient in the cause of Christ. We’re to speak evil of no one, avoid quarreling with others, and be perfectly courteous. And yet many are doing the opposite. Our frustrations are getting the better of us. Our old nature (often spurned by fear) is more prevalent than our Christ-like new nature that trusts God. The result is our “warring” attitudes and sharp words are winning no one, while our testimony suffers.

This is not the way of Christ. Jesus did not entangle himself “in civilian pursuits”. He kept his focus on the mission for why he came – to preach the Kingdom of God and pay for our sin. It is not the nature of our ambassadorship that Christ sacrificed himself for, or obedience to his command, “If you love me, keep my commandments”. The nature of our ambassadorship is oneof denying self, taking up our cross (suffering), and following Christ in attitude, word, and deed (Luke 9:23). It is sharing Christ, with the humble attitude and words, that will win the day for our King.

Let us accept the responsibilities we’ve given by our Lord and pursue how we’re to live a biblical, Christian life. Let our sole concern be to live as representatives of King Jesus, as citizens and ambassadors of the Kingdom of God, and let God worry about all the other stuff. His plans will not be thwarted. They will be accomplished exactly as he sees fit.