In recent weeks my heart has been broken as I have witnessed the continued moral decay of our culture. Beyond the horrible rancor that has become commonplace in American politics we are witnessing a rapid decline in the very moral fabric of our society. In less than a decade we have seen the legalization and celebration of sinful lifestyles that just a few years ago would not be spoken of in polite company. Embarrassingly, parents are being forced to talk with their children about gender issues and identities. I believe we are reaping the harvest of our sinful choices as a culture.

Truly we have called “evil good and good evil.” We have “put darkness for light and light for darkness,” “bitter for sweet and sweet for bitter.” We have deceived ourselves into believing that we are wise when we are foolish, and blind, and empty.

Perhaps nothing illustrates our present moral rottenness more vividly than the movie recently released by Netflix entitled “Cuties.” The movie features young pre-adolescent girls engaging in lewd sexually oriented dance. While the director, Maïmouna Doucouré attempts to frame the movie as an attempt to expose the sexual exploitation of girls, instead the film is a blatant exploitation of girls. While I have not watched the film, in fact I could not stomach the trailer, I have seen and read enough to know this is nothing less than child pornography. Unsurprisingly the film industry and mainstream media have all come to the defense of this movie, calling it “beautiful” art. Thus we see our culture call evil good and darkness light. Woe to us!

In stark contrast, last week I had the great pleasure of attending Street Hope, TN’s annual gathering, “Hope will Rise.” This local ministry led by First Baptist Powell member Devin Payne is dedicated to truly protecting young girls for sexual exploitation and is on the front lines of putting an end to the sexual trafficking of children. What those of us who attended “Hope will Rise” witnessed is how God by his grace can redeem and restore lives broken by the sin of sexual exploitation. I am so grateful for Street Hope, TN for their work to raise awareness of this horrible sin in our community. I am grateful that FBP supports Street Hope, TN through our prayers and our budget.

In the light of the moral decay of our culture, the attack on our children, and the blatant promotion of the most debased sins by the mainstream media, what are believers to do? Allow me to suggest a few ways.1. Evaluate your entertainment choices. By that I mean take a hard look at not only what you watch but what you support through subscriptions and fees.2. Get directly involved in making a difference. Volunteer, give, pray for Street Hope, TN and other like minded organizations. Serve in your church with children and students. Pray about becoming a foster family and provide a safe, christian home for hurting children and teens.3. Speak up. Make your voice heard. Vote after vetting candidates based on their stands on moral issues and only support those who stand for biblical values.

Let me leave you with the admonition of our Lord.

But when Jesus saw it, he was indignant and said to them, “Let the children come to me; do not hinder them, for to such belongs the kingdom of God. …And he took them in his arms and blessed them, laying his hands on them.

Let’s commit to work together to protect and bring children to Jesus. 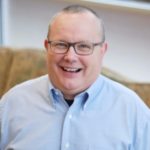 Tim joined First Baptist Powell in 2006. He is married to Carla and they have two daughters Hannah and Micah.