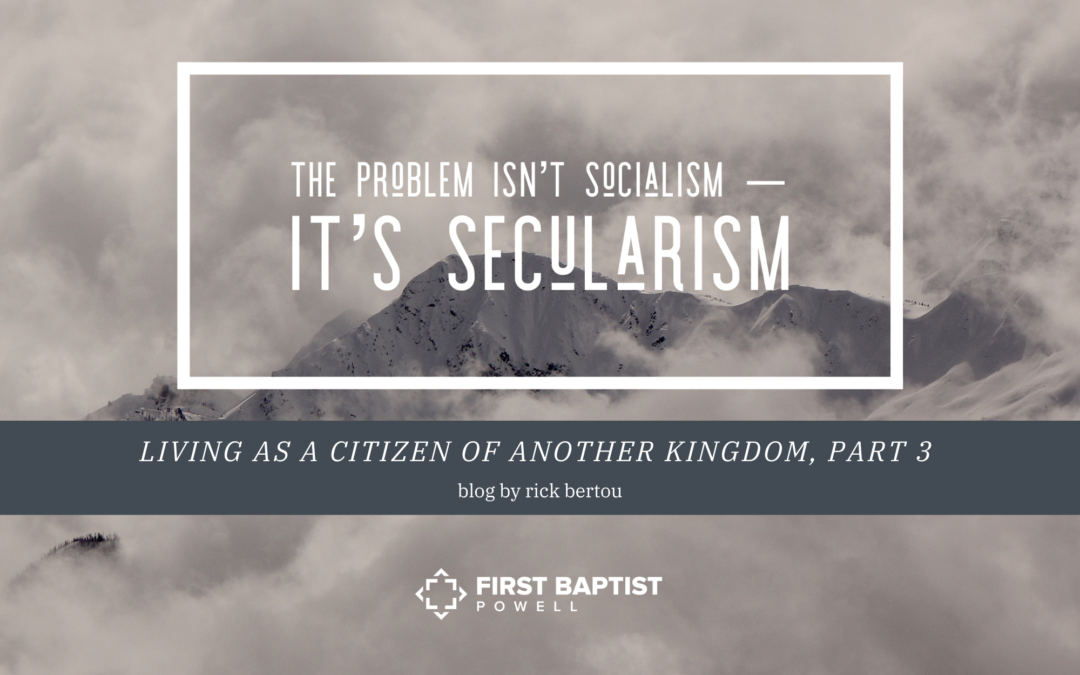 Living as a Citizen of Another Kingdom – Part 3

A few weeks ago, we began a new 6-part blog series entitled “How to Live as a Citizen of Another Kingdom”. Here are the links to the previous parts in case you missed it.

I’ve had many discussions with Christians since the pandemic and ethnic tensions began a year ago, followed by a harsh presidential election, and a directional shift in government policy in the recent months. Christian or not, American life has been quite a challenge over the last year for all of us! While a few Christians are celebrating the Democratic win, I find many more that are struggling with the direction they see us heading, maybe even fearful of it. For the sake of unity won by Christ on the cross, we’re going to resist the temptation to label the two political sides of Christianity, so we can speak to the issues that should concern us all.

In my conversations, the largest area of concern amongst most Christians who lean conservative (Republican, right-leaning independent, etc.) is a fear of moral socialism or progressivism. This is generally considered to be a policy move to the left. I’ve even heard some go as far to say, “If we keep going this way, we’re going to become like China!” I empathize with these fears as the role of Christians continues to be marginalized in our society and public discourse.

However, while I understand the concerns, I don’t think they are rightfully placed for believers and followers of Christ. To think in terms of moving left (or right) in terms of ideology or policyis to think linearly. Even more, it is to think horizontally or “earthly”. In part 2 of our blog series, we saw that Christians are not supposed to think in purely horizontal or earthly terms, rather we saw why it’s important to think vertically, in spiritual or eternal terms.

When we think horizontally, our main concern is where our ideology falls along a linear political spectrum and how that aligns with other people’s motives. We see ourselves as to the left of others if we lean more liberal and right of others if we’re more conservative. We take stands and argue for how our position is the “right” one which will benefit people the most and believe society’s solutions are found in our ideological camp. As a result, most Christians fear the left side or “socialism” while some fear the right side of “conservatism”.

The problem is that both ideologies are really “spiritual delusions” that fail to produce lasting solutions because they are “earthly” in nature. Christians on each side will claim some biblical merit to their ideology, but very often, their argumentsfall well short, as nothing more than earthly derivatives of biblical philosophies that are most often misconstrued. As a wholly independent ideology, the Bible is the only source of real “truth” because it’s written by God, through men who were carried along by His Spirit. And Satan, the enemy of God and all people, is all too happy to keep us fighting over horizontal, earthly, political ideologies than to find the real answers given by God alone.

Therefore, our fundamental problem isn’t socialism (or conservatism)… it’s secularism. Secularism is defined as the removal of all religious influences from government and society. Secularism is what we get when people no longer acknowledge that there’s a higher power than human thought or reasoning. Our Founding Fathers knew that a democracy only works where there is a common belief that somewhere, there’s a higher power that we are all accountable to for our behavior. When people no longer believe that we are accountable to anyone other than ourselves or to other humans – no higher power – then there is no longer any common moral code that governs us all. God is irrelevant, if, in fact, he exists. Since there is no higher power, to gain power, we look for other humans who agree with us, and together, we form alliances based on our common belief systemand then we push/pull against other groups, as we all struggle with defining how our freedom differs from control.

Secularization is what demoralized Europe a few decades ago. The number of churches and church attendance in Europe sharply declined in the 80’s and 90’s. Three years ago, my wife and I spent 11-days traveling around small towns in England for our 30th wedding anniversary. England is where spiritual giants like J.C. Ryle, Charles Spurgeon, C.S. Lewis, and D. Martin Lloyd Jones thrived in biblical study and ministry. And yet, in our modern day (as Cindy and I can personally attest), most of the great old churches in English small towns have been turned into museums, apartments, homes, or left abandoned. Secularization has led to a hemorrhaging of spiritual faith in England and most of Europe.

This is the direction I believe we are headed in United States of America. The fear that we might become China is misplaced. China’s brand of communism doesn’t appeal to most progressives who desire to think and do what they want. Even socialists want to live free – they just want to be freed of anything that makes them accountable to an Almighty God, his perfect Law, or the consequences of their law-breaking choices(by the way, that also places them in direct conflict with God’s people). The historical path we’re following is exactly the path that England, France, Germany and the rest of the European Union took over the past 40+ years.

Secularism is our fundamental problem. But there is a solution. The solution is to refresh in people’s minds the existence of an Almighty God, who is loving, righteous, just, and merciful, and by making disciples of Jesus Christ. It is to evangelize people, teaching them to observe all that Jesus commanded them (Matt 28:20), where they learn to treasure and savor Him as Lord. It is to faithfully live as believers who love God and others, so that people know we belong to Him (John 13:35). It is to invest in and influence the communities where we’ve been planted with the Gospel (1 Cor 9:19-23) which leads to salvation.

Let’s end the political arguing in our public discourse that Satan uses to divides people by refusing to play his game anymore. Let’s rise above the fray by focusing our conversations on what brings real solutions to society. His name is Jesus. His Word is Truth… and it’s the only “ideology” that has any lasting value.